Not me. The more they do this, the more I think fuck them. I don't want to go anywhere where these people are. Speakeasies will be the future for us. 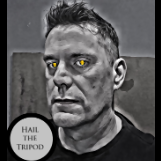