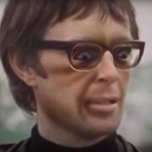 Fucking tell me about it. 52 plate, Piece of Shit, loads of miles, partial service history, six owners, some damage as seen in photos, running a bit rough- could be the engine, could do with some