The father of a friend before the advent of video recorders tried to capture this with a tape recorder and microphone off the television in the mid 70s, telling the kids to shut up lest it picked up b A rather personal choice here. Via Maurice Jarre, the main theme to Sir David Leans Lawrence of Arabia. My late father was wholly obsessed with the man, El Lawrence that is. I am sure my teen hol 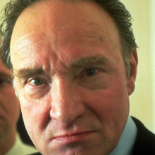 Morricone's film music has been featured on this thread many times, but here's a clip from a live concert by The Danish National Symphony Orchestra that contains about 2 minutes 40 seconds of the main